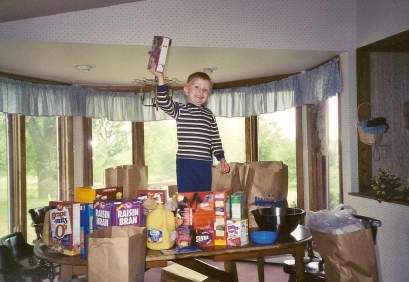 The JOY of Grocery Day!

Grocery day has always brought great joy to our household.  Sometimes it meant playing produce-weighing games with Dad while Mom shopped.  Most times though, it was Mom’s solo escape to the euphoric, peaceful and orderly world of the grocery aisles.  Often, it was the boys heading to bed with barren cupboards and waking to find the grocery fairy had paid us a visit during the night.  The mornings when I needed to make a milk run were particularly enjoyable because it generally meant fresh donuts would find their way into the cart as well.  But by far, our favorite memory associated with grocery day was “Restaurant Day.” 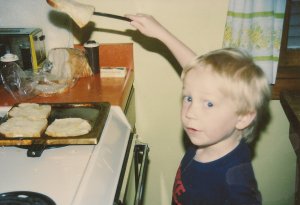 When my boys were growing up, the resulting well stocked pantry and refrigerator which followed grocery day often led to their begging me to let them play restaurant for lunch.  This could easily turn into a two hour project but it was pretty much a Mom-free activity and it was a wonder to experience. Even during school hours, I never felt guilty about letting them play this because it was such a fantastic learning experience to boot.  To begin with, menus had to be made.  This involved taking an inventory of what food was available, what food the chef had the ability to prepare, what prices should be charged for said food, and then the actual categorizing of the food and writing out of the menus, not to mention the tallying of bills and counting of money.  While all the kids cast their opinions in the menu-making process, they usually followed set roles in the game.   Generally, my oldest son was the cook, the second oldest was the waiter/cashier and the younger ones were the customers, but occasionally the roles were switched around.  Next the play money was divvied up between the customers and the menus were handed out.  The younger boys felt very privileged to be able to order whatever they wanted off the menu.  Their “money” allotment had to be taken into consideration, but with careful planning they could swing perhaps three entrees, a beverage and a couple of desserts.  My oldest took over the stove and I was free to accomplish whatever my heart desired while my boys occupied themselves with this game.

One year, when trying to brainstorm a birthday party idea for my youngest, someone came up with the idea of playing restaurant for his party.  This turned out to be one of our best birthday parties ever. (I’ll share our other birthday ideas in future posts.) With the birthday boy turning 9, party goers ranged in age from 6 to 10.  Guests were informed by mail that opening night of  “The Finicky Eatery” would be an invitation-only event, and THEY made the list!   We took extra care with planning and preparing the menus. The regular dining room table was removed and  replaced with several smaller tables which were covered with tablecloths.  Dinner music was turned on, the lights were dimmed (particularly effective for an evening party) and tabletop candles were lit.  Sons #3 and #4 finally got to play the roles of chef and waiter and excitement abounded as birthday guests arrived.  Each guest was given an allotment of play money and handed a menu as they were led to their table.  The amiable waiter began taking drink and appetizer orders as other guests arrived.  Soon the Finicky Eatery was filled to capacity with a lively crowd of children happily waving their paper money and ordering away to their hearts’ content.  To this day I laugh at the favorite menu item – Campbell’s Cream of Chicken Soup; the cook could hardly keep up with the orders!  One guest said, “Campbell’s soup is… SOUP?! – I always thought it was just for casseroles!”  Of course the meal ended with the staff bringing out a birthday éclair with a candle on top and asking all the restaurant customers to join them in singing happy birthday to the birthday boy.   The friends that participated begged us to repeat this birthday theme, but alas, this was our one and only “restaurant birthday”.

Have you ever felt like shouting at your family, “What am I, a short-order cook?!”  What child wouldn’t love to have a short order cook in their home?    If  you’re looking for a unique birthday plan or you’d like to kick your feet up some lunch hour (assuming there are enough children to play all the parts), be sure the fridge and pantry are well stocked, teach your child to cook a few basic dishes and introduce your children to the game of Restaurant.  Bon  Appetit!